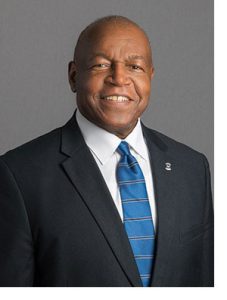 Lions Club International Foundation has provided grant of USD 100,000 to the Children’s Inclusive Playground in Curaçao and is reason enough to have it’s highest authority be present to inaugurate it.

A dream of Lion Mariela Romero 4 years ago, is becoming reality. From 4 years ago to much preparation, lobbying and with the cooperation of the Curaçao Lions Club, sponsors, donating over USD 195,000, made it possible for the 1st ever Inclusive playground in the Caribbean.

Together with some activities where donations will take place and personal visits to previous and future projects of the Lions Club of Curaçao will take place, President Alexander will not only bear witness to the great things the organization has done on the island, but also introduce Curaçao to the rest of the world.

A member of the Brooklyn Bedford Stuyvesant Lions Club since 1984, he has held many offices within the association, including club president, zone chair, region chair, vice district governor, district governor, cabinet secretary, cabinet treasurer and DGE group leader. He also served as a Lions Eye Bank transporter, a member of the District and Multiple District PDG Association, a trustee of the New York State and Bermuda Lions Foundation, and was appointed as the Lions representative to UNICEF-New York from 2012-2014. He has served on the USA/Canada Lions Leadership Forum Planning and Host Committees and has been a presenter at several USA/Canada Forums.

In recognition of his service to the association, he has received numerous awards including the club Lion of the Year, Club President’s Award, the Robert J. Uplinger Service Award, several District Governor Appreciation Awards, and the Multiple District Membership Growth Award. He is also the recipient of numerous International President’s Certificates of Appreciation, seven International President’s Awards and the Ambassador of Good Will Award, the highest honor the association bestows upon its members. He is a Dr. Franklin G. Mason Fellow, a W. P. Woods Fellow and a progressive Melvin Jones Fellow.

In addition to his Lions activities, President Alexander is active in numerous professional and community organizations. He has served as chairperson of the advisory board for the New York Urban League and as a board member of the St. Francis DeSales School for the Deaf. He is also a recipient of the Congressional Record Award.

President Alexander has two daughters, and his partner in service, Shabiki Cazabon, is a Lion and a Progressive Melvin Jones Fellow.

We serve with love and compassion in communities around the world. The selfless giving of our time and effort is precisely what makes Lions so special. When we give, we expect nothing in return. Yet we gain so much. Our service offers hope and connection in the face of great need and also extends an invitation to the world to join us. We embrace the joy that comes with “Service from the Heart”.